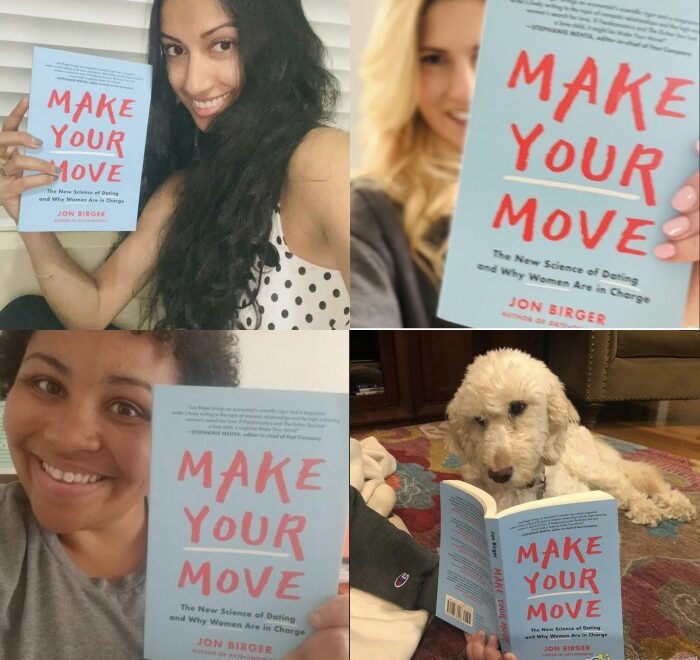 Make Your Move has been out for a month, which means I’ve been hearing from readers. So many tell me they’ve been turning advice into action — and getting wonderful results.

Over the next several days, I’m going to share some of the emails (with names, locations, etc. changed or removed to protect peoples’ privacy).

First one is from “Jessica”:

Hi Jon,
Just finished reading your book and wanted to share my own success story due, in large part, to your wisdom. I’d tried the whole dating app thing for a couple years with as much success as one can have being single two years later… and finally had the courage to quit them after reading the first couple chapters of Make Your Move.

I think what really sold me was that line specifically calling out the “cute trainer at your gym” (or something along those lines) because I have, in fact, been 19394728% crushing on my trainer since early January. For the first couple of weeks, I was set on the “flirt so much he can’t possibly question your intentions” strategy, but slowly realized that probably wouldn’t get me the results I wanted. I thought he was interested as well, but figured the gym had a “no dating clients” policy or something similarly prohibitive so, after a lot of reflection and “what’s the worst that could happen?” scenario running, I decided the only way I’d get what I wanted was by taking a risk and asking him out instead.

The backstory: due to an unusually busy weekend, he was a couple days late with sending my workouts one week so I’d been joking over text that he owed me a consolation prize. He seemed receptive and I so nearly made my move during that text conversation, but I chickened out at the last minute. I remember feeling bummed that I “didn’t just say something already”, but a couple days passed (and a couple more chapters were read), and I finally decided it was time to make my move.

I nearly s*** myself as the words came out of my mouth, but I still managed to end our next training session by looking him squarely in the eye and saying, “I’ve decided what I want for a consolation prize. You don’t have to answer me today, but buy me a drink sometime and we’ll call it even.” Did I mention I nearly died from nerves during those 10 seconds? I didn’t even give him a chance to respond; I just walked away and hoped for the best. The next ~16 hours were hellish and my home has never been cleaner, but finally he texted me the next day asking me out.

Was it terrifying? Yes. Worth the fear of rejection? 1938294746%. I asked him after that first date what he thought when I did that, and he said he was speechless, but that it was “incredibly sexy” and the best possible way to ask him out. He told me he was so thrilled afterwards that fellow trainers noticed the mood lift and asked him what had happened to him (lol).

Anyways, it’s still early days for us but I wanted to share this little story because it has been incredibly empowering and regardless of how long we date, I’m so happy I had the courage to be bold and ask for what I wanted. So – thanks a million, Jon!

First off, I want to thank Jessica for sharing her story. Not just because it brightened my day but because I think it can help other single women overcome fears and get what they want.

For far too long, the play-hard-to-get dating bibles such as The Rules and Ignore the Guy, Get the Guy have been teaching antiquated lessons — that the female role in dating is to be nothing more than a passive filter of male advances and that men cannot be truly happy unless a woman feigns disinterest and presents herself as unattainable.

The latest science shows otherwise (as I show in Make Your Move). Biology does not hard-wire men to chase and women to play catch-me-if-you-can. Plus, in the post-#MeToo world, men are increasingly cautious about being forward — which gives bold women like Jessica an enormous advantage.

Betcha anything there were other women at Jessica’s gym who were also interested in dating the trainer. While they sat back and waited, she actually did something about it. So kudos to Jessica.

My favorite line from her email?

“I asked him after that first date what he thought when I did that, and he said he was speechless, but that it was ‘incredibly sexy’ and the best possible way to ask him out. He told me he was so thrilled afterwards that fellow trainers noticed the mood lift and asked him what had happened to him.”